Everyone knows that Labour has the largest grassroots membership of any British political party, aided by thousands of keen Momentum activists. Everyone knows that as a result they will out-perform the Conservatives and Liberal Democrats when it comes to what is known as the election ground war — the grunt work of knocking on doors and talking to voters.

Drawing on responses to the Mile End Institute’s latest YouGov survey of voters in London, it may be that, once again, what everyone knows isn’t necessarily right.

At first flush, it does indeed appear that Labour is on top in the ground war in London. The graphic shows how Londoners have had various forms of contact from the three main parties in the last three weeks. 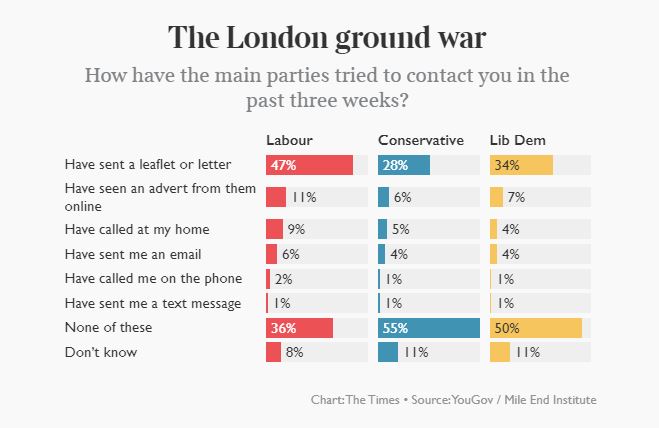 The difference is also clear when it comes to the activities that require people volunteering rather than stuff that can be outsourced or done centrally.

The figure for those who say they have been called by phone or spoken to on the doorstep is 11 per cent for Labour — about double the equivalent for the Conservatives and Lib Dems.

This is probably explained, at least in part, by the fact that Labour can call on an estimated 450,000 members, compared to the Tories’ 180,000 and the Lib Dems’ 105,000, even if some leaflet deliveries — like some phone banking — can be outsourced to private companies.

True, a full fifth of Londoners (21 per cent) report no contact from any of the three main parties. But the number who say they have had nothing from Labour (36 per cent) is notably lower than for either the Conservatives (55 per cent) or Liberal Democrats (50 per cent).

Interestingly, for all the attention currently being paid to the digital campaign battle, it is old fashioned bits of paper pushed or mailed through doors that dominate, being reported at least four times as often as digital ads.

But even for younger voters it is leaflets and letters that have been the primary contact mechanism. Digital campaigning is now clearly in second place as a campaigning tool, but it is still a long way behind.

Of course, campaigns — successful ones, anyway — will focus most of their resources on the constituencies most likely to change hands.

At the last election, the average majority in London’s 73 constituencies was just over 30 per cent and, while in an ideal world a party would campaign everywhere, in reality resources are scare and opportunity costs very real.

So the second set of figures show the equivalent figures, but just for marginal constituencies — those that in 2017 had majorities of under 15 per cent.

In our survey, they account for just 282 respondents, so we need to be suitably cautious about our conclusions; but still, a few things stand out.

The first is that contact rates in these constituencies are indeed higher overall. Almost all of the figures for the different types of contact in this table are higher than their equivalents in the first table.

The percentage of respondents reporting no contact at all falls to just 10 per cent in these marginal seats. 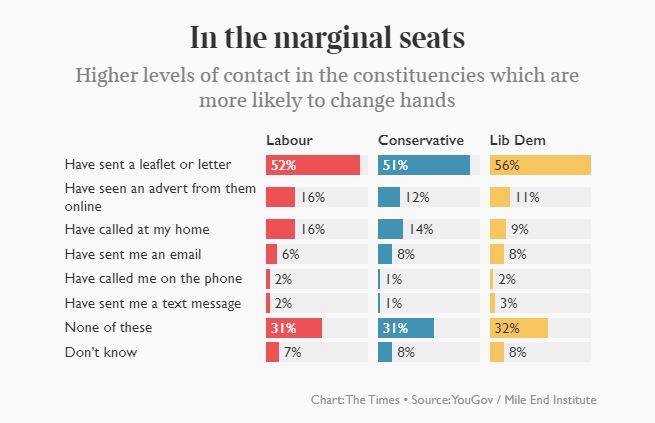 The second, which perhaps is less expected and more worrying for Labour, is that Labour’s ground war advantage largely vanishes once you focus just on marginal seats. Most of the figures are broadly equivalent from party to party.

The percentage saying they have had no contact from each party is basically identical — at either 31 per cent or 32 per cent.

Even for the things requiring on-the-ground volunteers, the scores are pretty similar between Labour and Conservative: 18 per cent report a call or home visit from Labour, compared to 15 per cent for the Conservatives.

This conclusion holds even if we define marginality in different ways — by looking at, say the most marginal seats (those with just a 5 per cent majority) or those which The Times YouGov MRP model predicts will be the marginal seats come polling day.

This slim Labour advantage is perhaps not what we would expect given the parties’ sizes.

Yes, Labour has a more impressive ground operation across all of London but in the seats where the election will be won or lost, its advantage appears to be slim at best.

Of course, these figures don’t measure intensity of campaigning (one leaflet is not the same as six leaflets, but will be so counted here), yet alone its effectiveness.

It may also be that Labour’s ground operation has stepped up since the polling was conducted — and that its bigger membership really comes into its own on polling day when what counts is the kind of “get out the vote” activity that really does require boots on the ground.

But, on the evidence so far, in London at least, the Conservatives appear to be pretty much matching Labour where it matters.