‘How much do Londoners care about Brexit?’ (with Alan Wager), UK in a Changing Europe, 11 November 2019.

How important will Brexit be in deciding the general election in the UK’s capital? To hear some people talk you’d think that London is also the capital of Remainia, jam-packed with voters who can’t wait to send a full slate of EU-flag-waving MPs to Westminster in order to stop Brexit in its tracks.

The truth – as ever – is a bit more complicated. Brexit is a big issue – but not the only issue.

Queen Mary University of London’s Mile End Institute and YouGov asked voters across the capital for their views on Boris Johnson’s deal.

It turns out they split three ways: 26% support the Prime Minister’s deal, 36% oppose it, and the biggest (and, who knows, maybe the most honest?) group of all – 38% – say they don’t know how they feel about the treaty.

Londoners were also asked to name the three most important issues that will determine how they will vote in the upcoming general election. And one thing’s for sure: Brexit will be uppermost in people’s minds when they head to polling stations across the capital on 12 December.

Age matters, though. The older you get, the more likely you are to see the question of whether or not Britain leaves the EU as one of the key factors determining how you vote. 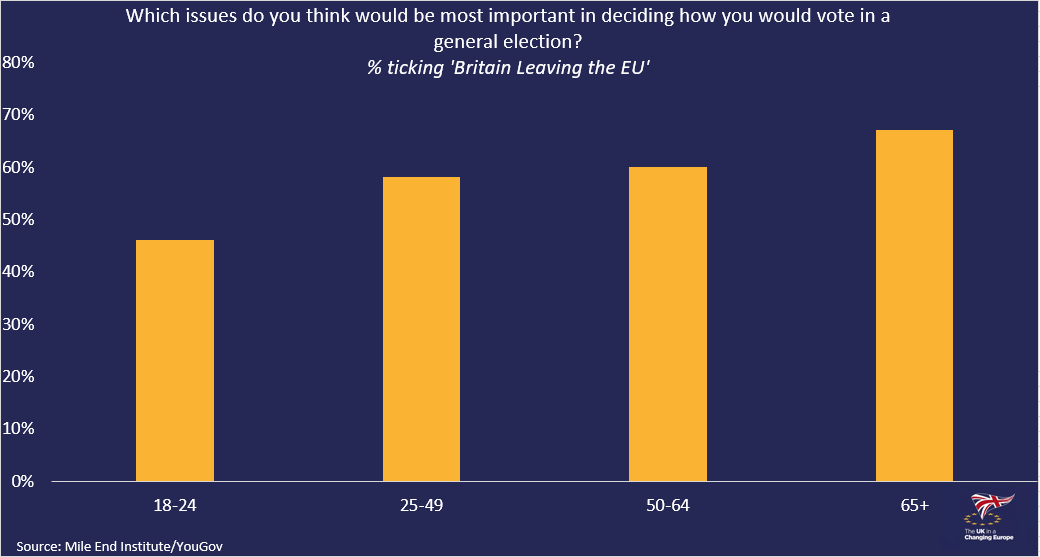 Key to Labour’s success in December will be its ability to make the general election – for as many voters as possible – about more than just Brexit. And it’s clear from polling in the capital that this strategy chimes with its voters.

So what do London’s Labour voters care about if they’re not thinking about Brexit?

Perhaps unsurprisingly, if you’re a Labour supporter you’re more than twice as likely to say that the NHS is driving your vote choice than if you’re planning on voting Tory: twice as many (52% vs 25%) of Labour voters than Conservative voters name the health services as a top-three issue.

Housing is the third issue most likely to be identified as important by London’s Labour voters, with 32% saying they will have the issue at the front of their minds when casting their ballot –a big contrast, once again, with Conservative voters in London, just 10% of whom say the same.

So what is it that the capital’s Conservative and Liberal Democrat voters do care about beyond Brexit?

The answer for Tories is crime – and if you are a Conservative voter you are far more likely (38%) to say that your vote is being determined by the rise in crime than if you are a Liberal Democrat (11%) or Labour supporter (17%).

This is in part reflective, once again, of a generation gap, but it also reflects where you live in London.

Despite young people being far more likely to be the victims of the spike in violent crime in the capital, they are far less likely to say the issue will define their electoral choice.

If you are over 50 you are twice as likely (28%) to list crime as a top-three issue compared to if you are a voter under 24.

Equally, if you live in outer London you are more likely to list crime as an issue than those living in inner London.

As for the Lib Dems, they seem to be gaining in popularity in London.

Indeed, support for them is up from 8% in 2017 to 19% today. Perhaps reflecting the fact that they were three times as likely to support Labour as they were the Tories back in 2017, their voters are exercised by healthcare (39%), the economy (38%), and the environment (35%).

As we’ve seen, though, for London’s Lib Dem voters, like London’s Tory voters, the biggest issue by far next month will be Brexit. Whether that focus will see a fair few seats switch in the capital, we’ll have to wait and see.