‘Where have all the women gone? The Tories have a serious gender problem’ (with Monica Poletti and Paul Webb), The Conversation, 15 March 2018.

The latest findings on the gender imbalance among the rank and file memberships of Britain’s biggest political parties make for worrying reading – particularly for the Conservatives.

Over-time comparison suggests that there are now fewer women belonging to the Conservative party than there were nearly a quarter of a century ago. The Tories have, in recent years, increased the number of women representing them in the House of Commons to 21% – an achievement that owes something to David Cameron’s modernisation project and to the sterling work of Ann Jenkin’s Women to Wincampaign, but perhaps even more to the unexpectedly strong result that the party chalked up at the 2015 general election. However, no such progress is being made in the grassroots.

The findings come from the latest surveys by the ESRC-funded Party Members Project (PMP) run from Queen Mary University of London and Sussex University, carried out just after the last general election in June 2017.

The lack of women among the Tory rank and file could well turn out to be a serious problem for those interested in getting the party to look more like the country it wants to govern. As the recently-published comparative study by the Swedish political scientist, Drude Dahlerup, makes clear, anyone who is truly serious about getting more women elected to parliament is going to have to consider the introduction of quotas. But they will also need to pay attention to the pool and pipeline of potential candidates available to political parties since, if there aren’t enough women at the grassroots, then achieving anything like equality of representation will prove an uphill struggle.

Overall, far more men than women join Britain’s political parties, although the 61:39 ratio our 2017 surveys reveal means that the UK isn’t that unusual (or even that terrible) in comparative terms. Data suggests the gender imbalance in Germany is considerably worse and only a little bit better in the famously more egalitarian Nordic countries. And, in large part because more women than men have joined the British Labour Party in the last two-and-half years, things are more equal in the UK than they used to be. But, sadly, that’s far from true for the Tories. Right now, fewer than one in three grassroots Conservative members is a woman.

The situation might not be so worrying if the Tories could somehow tell themselves (and the rest of us) that the direction of travel was positive.

But all the surveys ever done on Britain’s three biggest parties clearly show that it’s anything but.

In marked contrast to Theresa May’s, Jeremy Corbyn’s grassroots membership is (like the Greens’) not that far off achieving gender balance. The SNP doesn’t do too badly either, relatively speaking at least.

UKIP – assuming for the sake of argument that it still exists – lies at the other end of the spectrum. Men make up three quarters of its members.

The gender imbalance in the Lib Dems is nowhere near that bad. That said, the party, which has never done particularly well when it comes to electing women MPs (even though it now has a female deputy leader in Jo Swinson), will be keen to improve on a situation where getting on for two-thirds of its rank-and-file members are men.

For the Conservatives, a failure to expand the pool and the pipeline by attracting more female members will make it more difficult to build on whatever has been achieved so far at the parliamentary level. And with this long-term goal in mind, there is another statistic which should surely give the Conservatives serious cause for concern. 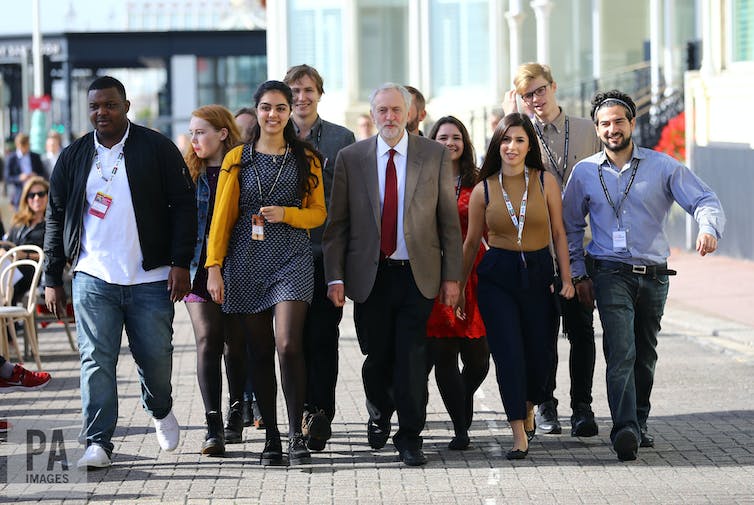 The flood of new members into the Labour party since 2015 might not represent as much of a youthquake as the now familiar footage of photogenic teens and twenty-somethings mobbing Mr Corbyn suggests: after all, plenty of middle-aged and older folk have rallied to his (more or less red) flag, too. But, by our calculation, out of every 100 Labour members aged between 18 and 24, some 57 are women compared to 43 who are men. That should bode well for the party’s gender balance in years to come.

But the equivalent figure (and therefore the future) for the Conservative Party is truly frightening. By our reckoning, only five per cent of rank and file Tories are aged 18-24 but, shockingly, as many as 85% of those young adults the Tories have persuaded to join them are male rather than female.

Brandon Lewis and James Cleverly were recently appointed to the top jobs at Conservative Campaign Headquarters (CCHQ) in order to up the party’s membership game. Our research suggests they’ve got their work cut out. Doubtless they’re the best men for the job – but they may be part of the problem.